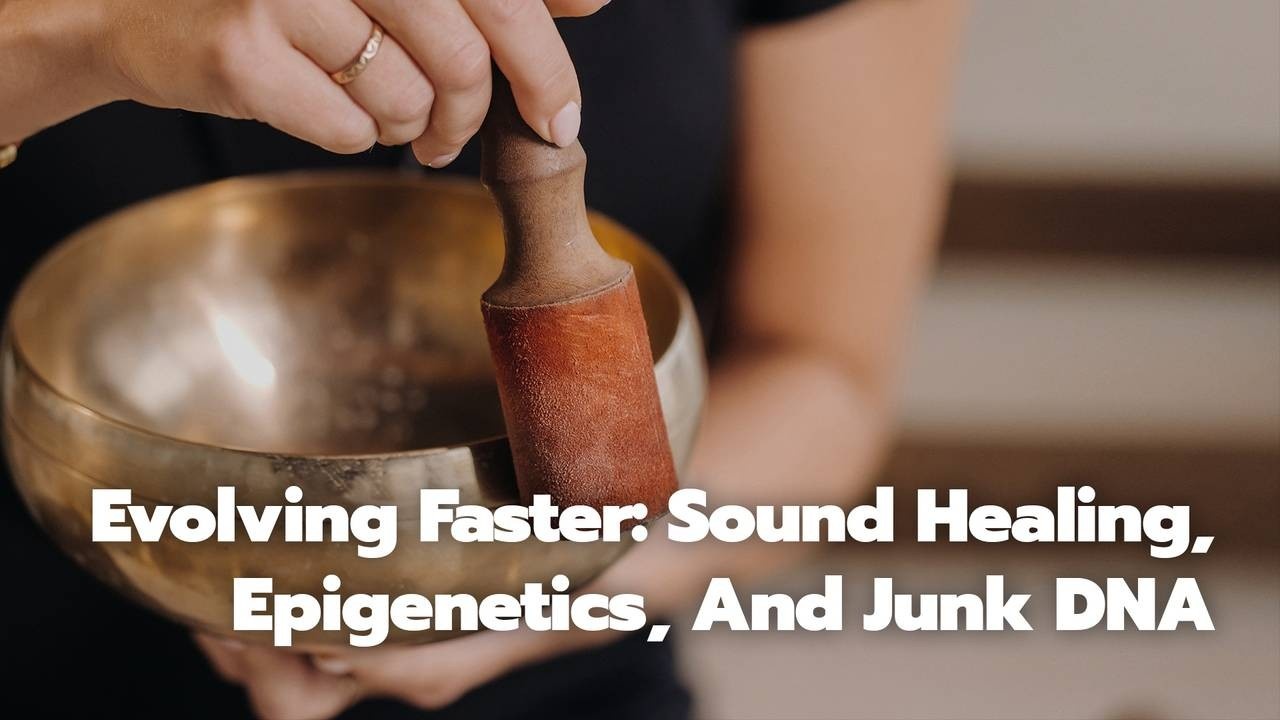 In this article, we hone in on the concept of systematic conscious intervention in our own evolution, particularly using the transformative and healing capacities of sound and intention to re-write non-coding “junk” DNA.

Since the early 1940s, a genuine microbiological framework for understanding the power of suggestion, intention, and belief has been developing. This field is known broadly as epigenetics.

Find out some of the ways we can exploit epigenetics to accelerate our evolution and personal growth here and now.

It’s “Junk” If We Don’t Understand It

As most readers would know, the vast majority of our DNA “text” is not used in the coding of proteins and enzymes—it is “non-coding”—and scientists initially dubbed it “junk DNA”.

How much of our DNA is junk?

About 95–98 per cent—rather a lot of “waste” for nature to hang onto, I think you will agree (some scientific estimates go as high as 99 per cent).

Since it is not responsible for constructing our basic physical form, its purpose has remained mysterious until very recently.

We now know that a large portion of that “junk” DNA is made up of mobile genetic elements (transposons and retrotransposons) or “jumping DNA”. Through the principles of epigenetics, these mobile elements can rewrite and activate—or deactivate—certain genetic codes.

Jumping DNA reportedly makes up as much as half of the total DNA nucleotides.[i]

Another major portion of the non-protein-coding regions of the genome is comprised of variable-number, tandemly repeating sequences known as “satellite DNA”.

It seems likely to my way of thinking that both jumping DNA and satellite DNA interface with the morphic field, thus responding to alterations in one’s state of consciousness. Satellite DNA’s ability to expand the number of repeating sequences means an increase in the information-carrying capacity of DNA.

As a fractal antenna, DNA interacts with the vacuum/aether/unified field, transducing the zero-point energy which interacts with our consciousness. A greater interaction between our DNA and the “potential” energies of the vacuum might equate to expanded consciousness, while a lesser interactivity would result in a contracted awareness. Thus, “certain modular arrangements of DNA would be more conducive to conscious awareness.”[iii]

Epigenetics and the Linguistic Connection to Junk DNA

In the 1990s, a team of Russian linguists led by Dr Peter Gariaev discovered that the genetic code in “junk” DNA follows uniform grammar and usage rules virtually identical to those of human language. It turns out that the “junk” was laden with the intimations of intelligence, purpose and meaning (a perspective forbidden by fundamentalist Darwinism).

Within non-coding DNA segments, scientists have found large numbers of “endlessly repeated sequences with no apparent meaning, and even palindromes, which are words or sentences which can be read in either direction.”[v]

More recently (2014), it was reported that scientists at the Wyoming Institute of Technology, working with linguists and philologists from Bob Jones University in South Carolina, had made further compelling linguistic breakthroughs.

Linguistic professors at BJU, were working on translating decoded DNA segments that WIT was providing. They discovered that the language in the “junk” was indistinguishable from ancient Aramaic, and parts of the script it contained were at times remarkably close in composition to verse found in the bible—and, at times, contained direct biblical quotes.

On the human gene PYGB, Phosporomylase Glycogen, a non-coding transposon, holds a linguistic sequence that translates as “At first break of day, God formed sky and land.”

This bears a stunning similarity to Gen 1:1 “In the beginning, God created the heavens and the earth.”

Gene Bmp3 has a Retrotransposon sequence which translates to the well-known 1 Cor 6:19 “Do you not know that your body is a temple of the Holy Spirit, who is in you, whom you have received from God? You are not your own.”[vi]

Thus, human language seems to have emerged from the grammatical and syntactical structures within our very own DNA—the massive “junk” portion, no less!

Hence there appears to be no substance to the notion that there was some kind of “natural” linear progression from the primitive form of pre-linguistic communication in the animal kingdom to human language. It was a quantum leap right out of the human genome (possibly with some outside “help”).[vii] 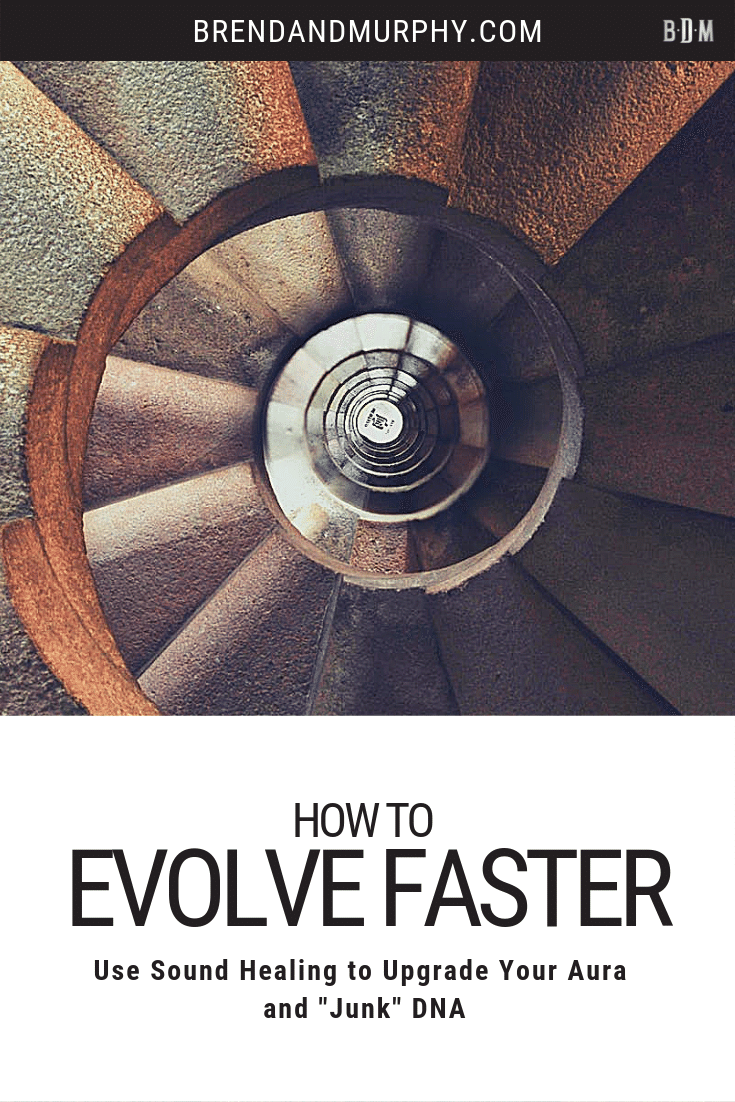 These linguistic links offer tantalising, indirect evidence that we can linguistically alter our very genome, in particular the abundant “jumping genes,” whether using spoken word, chant, or silent mental intent.

Collectively, this body of DNA research accounts for the power of hypnosis (and potentially most other psi phenomena, or “hypercommunication”).

One of the basic assumptions made by the Gariaev team is that “the genome has a capacity for quasi-consciousness so that DNA ‘words’ produce and help in the recognition of semantically meaningful phrases”.[viii] (Emphasis added)

Because the structures of DNA base pairs and of language are so similar, we can alter our own genetics by simply using words and sentences, as has been experimentally proven.

Live DNA “will always react to language-modulated laser rays and even to radio waves, if the proper frequencies are being used. This finally and scientifically explains why affirmations, autogenous training, hypnosis and the like can have such strong effects of humans and their bodies.”[ix]

One of the more famous cases of hypnotically induced genetic alteration was documented c. 1951 at the Queen Victoria Hospital in West Sussex, England. It involved the cure of Brocq’s disease in a teenage boy. His skin was dry, hardened and reptile-like, and it cracked and bled easily.

Using hypnotic suggestion, anaesthetist and hypnotist Dr Albert A. Mason remedied the condition in a matter of weeks—a miracle at the time, since Brocq’s disease is a genetic condition, so eliciting a cure meant that Mason had effectively reprogrammed the boy’s genes (which scientists of the time “knew” was impossible).

Today we know that by using correct light and sound frequencies—as well as words—we can activate some of our mobile DNA to “re-code” certain portions of the genome, thus effecting a physical transformation at the most fundamental biological level.

During 1984–85, Gariaev made a startling discovery.

He found that an in vitro DNA sample in a test tube had the ability to attract and harness coherent laser light, causing it to spiral along the DNA helix. This alone was an unexpected (and paradigm-shifting) discovery, but it wasn’t all. After the DNA sample and all the apparatus were removed, the photons continued to spiral as if the DNA was still there.

This was dubbed the “DNA phantom effect”, and it signified that some “new” self-sustaining  scalar/torsion field structure had been excited from the vacuum/aether and was entraining the light even in the absence of the DNA!

This effect has been observed to last for up to a month, showing that this new field structure possesses remarkable persistence and stability. Even after blowing the phantom away with gaseous nitrogen, it returns within 5–8 minutes (torsion fields are known to be stable and persistent).

Gariaev et al. also remark that “sound waves radiated by the DNA molecules were registered in these experiments”, showing that DNA not only absorbs and emits light (as is well established) but radio frequencies and phonons as well.[x]

It is a little-known fact that our DNA strands have an innate sound-light translation mechanism. We are all alchemists on a microbiological level, turning sound into light and vice versa.

Our DNA harnesses both sound and light in its moment-by-moment operations, but, more than this, it creates vortices in space-time, opening a window to time-space/the time domain.

To put it another way, our DNA creates “magnetised wormholes” in the fabric of space—“tunnel connections between entirely different areas in the universe through which information can be transmitted outside of space and time. The DNA attracts these bits of information and passes them on to our consciousness.”[xi]

Most of us know this process as intuition or psychic insight. Ordinary human memory would also operate on similar principles, since available evidence indicates that our memories are stored not in our brains but in aetheric/implicate/time-space field structures which envelop and interpenetrate our bodies (a.k.a., the “auric fields”).[xii]

Various researchers have theorised that the energy occupying time-space/aether which is responsible for these phenomena is twisting/spiralling vortices of “torsion energy”. The “magnetised wormholes” mentioned above could also be described as “torsion fields” or “vortices”.

A torsion field is a self-sustaining vortex in the aether/time-space which can produce measurable EM effects such as light. By spinning, a vortex can excite photons or virtual photons out of the fabric of space/aether—and static torsion/scalar fields can harness and store light within them (as we see with the DNA phantom effect).[xiii]

Sol Luckman, developer of the sound-based Regenetics Method of healing and transformation (of which I’m a certified facilitator) considers qi/prana/orgone to be the light-based effect of torsion fields.

In Conscious Healing, he describes torsion energy as “universal creative consciousness or subspace energy (Aether) experiencing itself in time…Torsion Energy in the form of a ‘life-wave’…interfacing with and modifying Potential DNA’s Transposons is the driving force behind the evolution of human consciousness and physiology.”[xiv]

Dan Winter would point out that “torsion” isn’t really a scientific term in this context and what we’re really dealing with is the implosion physics of wave phase conjugation (defined by phi, the Golden Ratio).

The first research generally credited with the discovery of this “fifth force”—so-called torsion—is that done in the late 1800s by Russian professor N. P. Myshkin.[xv]

Einstein’s colleague Dr Elie Cartan first coined the term “torsion” in 1913 in reference to this force’s twisting movement through the fabric of space-time—but his important work was virtually buried by the rampant success and notoriety of Einstein’s theories.

In the 1950s—the same decade in which Dr James Watson and Francis Crick discovered the helical structure of DNA—pioneering Russian scientist Dr Nikolai A. Kozyrev (1908–1983) conclusively proved the existence of this energy, demonstrating that, like time (and DNA), it flows in a sacred geometric spiral (defined by phi),[xvi] as I detail in The Grand Illusion – Book 1.

Russian scientists are reported to have written thousands of papers on the subject in the 1990s alone, and, more recently, award-winning physicist Nassim Haramein, along with his colleague Dr Elizabeth A. Rauscher, has re-worked Einstein’s field equations with the inclusion of torque and coriolis effects.

If your “soul” is in fact a “torsion field” or implosive vortex in the fabric of space (or a structure of multiple nested vortices, as described by seers and occultists), then your consciousness, by definition......