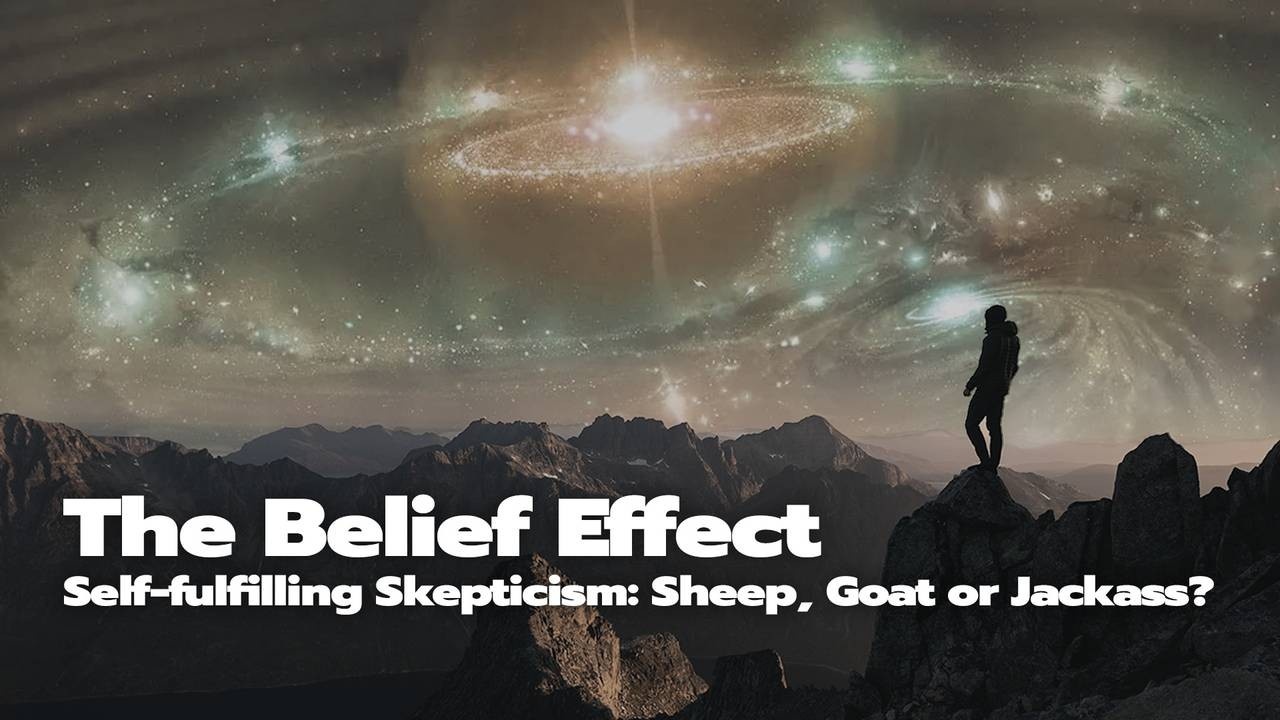 Repeated ignorant or stubborn denial of the existence of certain powers does not keep them from existing—except for us! —Harold M. Sherman

Have you ever noticed how closed-minded skeptics (CMS) rarely if ever have any experiences with the psychic faculties (siddhis) or “the paranormal” in general?

Is belief actually a self-fulfilling prophecy?

Soviet research into psychokinesis involving mind-over-matter superstar Nina Kulagina (1926–1990) demonstrated qualitatively that a skeptic’s mere presence DOES have an effect on a psychic’s ability to function properly.

Hence, with a CMS (or several) in the room or otherwise involved in the experiment, a psychic is more likely to “fail,” thus “proving” the CMS right (at least in his own narrow reality tunnel).

Author David Wilcock has suggested that if consciousness creates all known energy, can manipulate matter, and is ultimately a vibrational movement of aetheric/zero point energy, then the level of consciousness, intelligence, or love present is directly proportional to the vibrational speed of aether vortexes/torsion in that locality.

Higher speeds invite higher degrees of intelligence and/or love because there is then more energy available, meaning will has more fuel for exerting effects on “external” systems.

I agree with these observations completely.

Dr. Valerie Hunt’s research in Infinite Mind showed a correlation between electromagnetic auric field frequencies and the “level” of consciousness occupied by the individual. Healers, mediums and mystics showed higher frequencies in their electromagnetic fields than others not of those categories, illustrating that those possessed of “higher” consciousness are, in some sense, literally “on a higher frequency.”

Those fixated on or believing solely in “material reality” exhibited lower dominant frequencies and were bereft of the higher.

In fact, gamma frequencies in the brain of 40-100 Hertz—the highest of the better known bands of brainwave frequencies (the higher band being Lambda, reaching up to about 200 Hz)—have been linked to the ability to manifest intention in the world. Gamma states represent the brain in hyperdrive, working at its most intensely. “This oscillation is conducive to creating links across many parts of the brain,” facilitating an integrated whole-brain state.

Paradoxically, the extreme high and low ends of the brainwave spectrum have the same states of consciousness associated with them, and different oscillations can be present at once in different parts of the same brain.

Under controlled experimental conditions, she could (among other things) separate an egg yoke from the white from a distance of 6 feet while it floated in a saline solution using only her intention. She exhibited low frequency theta brainwaves of 4 Hz—normally associated with a deeply relaxed trance—whilst simultaneously showing extreme physiological agitation/arousal, including a pulse rate of 240 bpm.

These strenuous efforts left her absolutely exhausted, and temporarily blind on that particular occasion.

Perhaps all of the above explains why Kulagina’s PK abilities “worked better in an atmosphere of friendly mutual trust and belief”—PK, as we know, generally requires intense states of physiological arousal and higher frequency brainwave activity, all of which drains large reserves of bioenergy. PK is a higher brain function.

Kulagina experienced less stress when working alone and it was said that her PK ability was mood-dependent (both her own mood and that of the observers) and expended more energy in a hostile or skeptical atmosphere (where the collective vibration would have been lowered).

Hostile skeptics have something of an innate psi- or consciousness-damping effect; they literally operate at a lower frequency, their mind fields interfering with those of the test subject. The fact that separate minds interact via measurable electromagnetic fields (and some not-so-measurable fields) has been proven by Hunt and others, and I detail much of this fascinating research in The Grand Illusion - Book 1

Some time before 1919, Emma Hardinge Britten said, “experience has shown that the conditions under which spiritual phenomena are produced through mediums are not only helped or hindered by their mental states, but also by the will, magnetism, and mental states of those who surround them.”

The situation hasn’t changed a great deal since then and similar observations have been made by today’s researchers such as physicists Amit Goswami and Russel Targ (the latter a pioneering psi researcher).

Well known American medium Allison DuBois comments amusingly that when she “brought through” her first deceased professional psychic-medium, communicating with and understanding him was very easy; communicating with deceased former skeptics, on the other hand, she likens to pulling mud through a colander.

For her, the more open-minded people are more pleasant in death than those who lived with closed minds.

Negativity causes chaos or entropy in the local ambient (and personal) energy fields, whereas positivity, gratitude, or love cause coherence, beauty and order—just look at the instances of saints and yogis whose dead bodies have remained impervious to decay weeks, months, and years!

Hence, the mere presence of a skeptic (especially a dogmatic and belligerent one) during psychical research may cause energetic chaos/disorder and potentially negate psi effects; they create incoherence or “psi-damping” effects (just one of the many reasons that no sane or well informed psychic would ever get involved with the thought-fields connected to any “super skeptics’” psychic “challenges”).

(Fear of failure—which might be likely to increase around hostile observers—also plays a role in some psi experiments, creating inner conflict in the subject that can negate results.)

Practically speaking, the minds of the experimenter/s and the subject are entangled in aether/zero point field/vacuum/time-space/implicate order, and therefore psi-negative beliefs belonging to the mind or torsion/scalar field of the former can deleteriously affect the psi operations of the latter’s.

Swiss psychologist Carl Jung (1875–1961)—the originator of the theory of the psychological archetypes—noted with interest that the English medium Eileen Garrett fared poorly in parapsychologist J.B. Rhine’s card-guessing experiments because she was unable to conjure any feelings for Rhine’s “soulless” test-cards.

Much experimentation has also shown that psi effects have a tendency to start out higher in the initial stages of testing and then drop off as the participants lose interest and boredom sets in (the “decline effect”).

In 1942 psychologist and parapsychologist Gertrude Schmeidler initiated her infamous “sheep-goat” experiments, designed to test whether belief and open-mindedness would enhance psi function in contrast to skepticism. Two groups, “sheep” who believed in or were simply open to psi, and “goats” who did not believe, were put through identical standard controlled ESP tests.

The outcome indicated that believers in the possibility of ESP scored better than those who did not: the disbelievers scored lower, ergo belief is a legitimate variable mediating psi functions.

The irony is delicious.

Dr. Mario Varvoglis (above), was President of the Parapsychological Association from 2001–02, and has been involved in psi research since the mid-1970s. Of Schmeidler’s research he has said that the sheep-goat discrepancy “has been confirmed by many other researchers. A meta-analysis by [psychologist Tony Lawrence], covering 73 experiments by 37 different researchers, clearly confirms that subjects who believe in psi obtain, on the average, higher results than those who do not believe in it.”

Lawrence’s meta-analysis involved all sheep-goat forced-choice experiments conducted between 1947 and 1993 and consisted of more than 685,000 guesses by 4,500 participants.

The overall results were strongly in favor of the sheep-goat effect—to such an extent, in fact, that to reduce the results statistically to chance would have required an additional 1,726 unpublished and/or non-significant studies.

No plausible explanations for this result other than psi have been put forth.

As author David Hamilton puts it regarding his own psychic explorations: “Faith, I discovered, meant the difference between broadband and dial-up.”

American psychic and author Harold Harold Sherman (1898–1987) had noted in the early 1940s that while it is possible to receive thought impressions from a skeptic, it is extremely difficult for someone of that mindset to act as receiver.

Even for professionals, trying to “receive” from a skeptic can be a big ask (as per DuBois’ previous comments). Varvoglis confirms that the more open we are to psi experiences, the better the chances that the world will “respond” by creating them.

Co-developer of the early American military’s remote viewing program (and one of the star remote viewers) Ingo Swann weighed in on Schmeidler’s sheep-goat tests, stating that the results initially came as a bombshell because, “Skeptics and disbelievers, of course, very much desired not to be seen as dysfunctional regarding something they were trying to debunk.”

Ergo, after these experiments were replicated variously by other researchers with similar results, “skeptics and disbelievers decided NOT to take part in ESP tests. In any event, here was something to be swept under mainstream carpets…”

It is important to realize, as author and former host of the PBS television series Thinking Allowed Jeffrey Mishlove points out, that the sheep-goat studies do not necessarily distinguish those who believe in ESP from those who do not.

On that basis, imagine how psi-negative the beliefs of the fanatical and hostile “skeptic” must be. Far better to be open to possibility than closed to it for fear of one’s beliefs being wrong.

Harold Sherman (below), who was ahead of his time, articulated the role of belief and the subconscious mind in the attempt to function as a successful receiver in a psi endeavour, explaining that telling yourself with certitude that there is no such thing as psi is tantamount to instructing your subconscious mind to shut down the psi faculties so they do not operate for you.

The late American intuitive Edgar Cayce found that there were various factors that could prevent him from giving a reading for someone by hindering or blocking his subconscious mind; for instance, the thoughts of those in the room who were “not in accord with the type, class or character of information sought at that particular time.”

Because of the sensitivity of the process, as well as the difficulty of interpreting the Akashic records themselves, “anyone present for a reading had to be unified in his or her desire to be of help to the questioner.”

The absence of this synergistic factor could and in some cases did blunt Cayce’s ability “to reach that position, that plane, that sphere, from which the [data] was being sought.”

The point is that if you are creating your own reality, as a spark of the eternal infinite temporarily made manifest in a localized humanoid form, you may as well employ the full force of an open and inquisitive mind in engineering your personal reality tunnel.

Anything less just seems so… limiting.

This article is excerpted from The Grand Illusion: A Synthesis of Science & Spirituality - Book 1. Grab it for X-mas and take your awareness to a whole new level. (Lowest price - postage included - is on my website - follow the link above)

What readers are saying:
“Every person in the field of ‘paranormal’ psychology or related topics should have this book as a major reference.” - Dr. Buryl Payne
“A masterpiece...The Grand Illusion is mind-blowing.” - Sol Luckman, author of Potentiate Your DNA.
”Murphy masterfully weaves complex information with an easy readability—and sensibility—that makes TGI the rare non-fiction book that is actually hard to put down.” - Eileen McKusick, author of Electric Body, Electric Health
“You've written the best synthesis of modern science and esoteric science that I've seen in 40 years of study in that area. Brilliant!” - Michael K. Wade