What Ideology Does to Your Brain 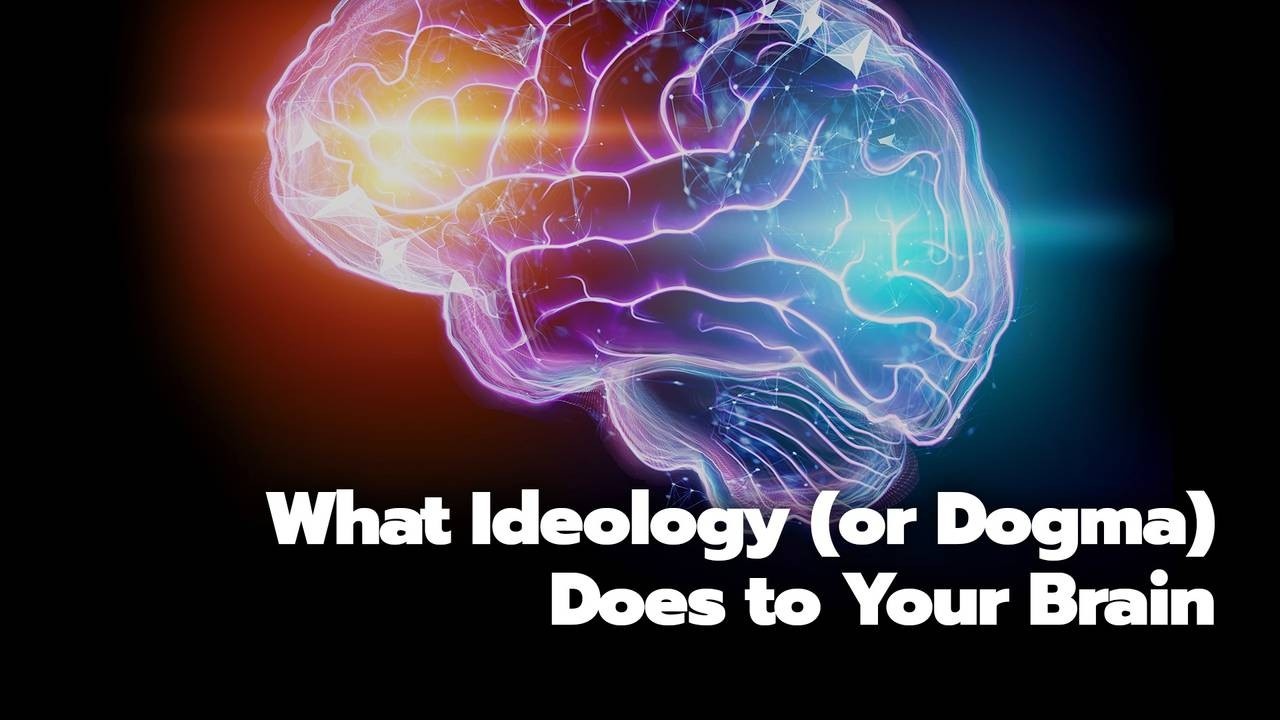 Terms Defined
When people hear the term “ideology” they typically think of a political belief structure or formula for thinking.
A synonym for ideology is “dogma” defined as “fixed, especially religious, belief or set of beliefs that people are expected to accept without any doubts.” 2

This, in particular, is the sense in which I use the term ideology. I will use it interchangeably with “dogma” here.

Ideology is particularly good at hardening your mind. It tends to make thinking rigid and inflexible; formulaic by definition.

Consider that, thanks to the internet, we all have access to more information and more perspectives than we will EVER have time to fully explore, let alone think our way through critically.

We don’t know what we don’t know. 🤷🏻‍♂️
We are constantly being stimulated by new information, and never before have we had so much access to views that challenge our own as we do now.

Information accumulates in almost any given field of specialty faster than any one human can manage to keep up with, and, moreover, it almost immediately finds its way onto the net for others to peruse.

Thus, our neural networks and information grids can be–in theory–constantly adjusted and upgraded, forever being refined and becoming more sophisticated and complex (in principle, at least).

Imagine how different life must have been prior to the electronic revolution.

In 1886 (regarded by many as the year of the birth of the modern car), dogmatic or ideological thinking was much more understandable. Access to information was extremely limited by today’s standards, it did not flow nearly so freely, rapidly, or voluminously.

Access to perspective was accordingly more limited. People had nowhere near the amount of different perspectives available to them.

Letters and journals were delivered by astonishingly slow and primitive methods, compared to today.

It might take a month or more for a letter to reach a friend or colleague so that their constructive input on your thesis could be obtained.

Nowadays you can text your friend a link to the latest study confirming the dangers of wifi or 5G over the phone in an instant, in between checking emails and searching for the latest autoimmune-paleo recipes (which we’ll likely need more and more of if we allow this “transhumanist ecosystem” to continue to intensify unchecked).

What does this have to do with dogmatic thinking?

Dogmatic thinking is resistant to change – unnaturally so, you might say.

But when fundamentalist style “thinking” takes root and dominates your psychic landscape, you tend to become less adaptable, less capable of logical reasoning based on evidence, and much more prone to the fallacy of axiomatic thinking (and various other supporting fallacies of course).

In short, dogma/ideology artificially limits intelligence. It makes you dumber than need be.

Why would anyone do that to themselves? Well, of course, being that it makes us stupid-er, it isn’t generally a choice made at a conscious level. Self-awareness tends not to be the strong suit of dogmatists, you see. 😉

"The Science is Settled" (and other complete BS)
How many times have we heard certain groups proclaim “the science is settled” on controversial issues? Far too many. What they are really saying is, “My mind is settled/made up, and I’m simply not open to further information – UNLESS it confirms my current position. I’m not willing to change. I am a dogmatist.” (Not naming any names here! 😉 )

Fundamentalists have never taken kindly to heretics and unbelievers (different modes of being and perspectives).

What they so deeply desire is status, the comfort of belonging, predictability, reassurance, the (illusory) elimination of uncertainty, and to be “right” - and they so badly want others to see things their (righteous) way that, in extreme cases, they have resorted to literally burning people alive, forcibly injecting people against their will, or lining them up against a wall and shooting them when then have refused to recant their heresy.

(The list of tortures and crimes goes on and on.)

Fanatical ideologues have used (and still do use) amazing feats of mental contortion to reason that the sinful unbelievers no longer own their own bodies and lives - those are forfeit.

The ideologue may do with them what they please in their attempts to “save” the heretic (and/or society) from themselves. (Forced medical interventions, anyone?)

The arrogance inherent in this form of “thinking” is truly breathtaking.

As you can see, ideology/dogma can, under supportive conditions, rapidly turn from inflexibility and stupidity into elitism and crimes against humanity. Totalitarian regimes have repeatedly tried to justify their fascism and violence by invoking the “greater good.”

But it doesn’t fly for critical thinkers who have cultivated that rare and precious skill called discernment–we see through that bullshit. It’s all just self-serving verbiage designed to numb the mind and dull the senses. That’s the job of “good” propaganda: shutting down the neocortical thinking faculties while aggravating emotions (limbic brain).

So don’t be an ideologue who pretends to already have all the answers. Know-it-alls fool no one but themselves.

The science is never settled–because the job of science (which is a tool, not a belief system or collection of "facts") is ever to continue probing, checking, replicating, seeking answers, and refining our understanding. That doesn’t happen if we pretend that knowledge is fixed where it stands and can never be updated or improved on.

If monkeys had a day to build a tree house using human tools would you accept their first attempt to be the ultimate construction possible? That they had reached the pinnacle of all possibility?

Didn’t think so. We are the monkeys and science (the scientific method) is our "tool kit."

In a lecture he gave at the University of Southwestern Louisiana Lafayette, Louisiana in 1989, the late biologist and pioneering reincarnation researcher Ian Stevenson said:

"What [history] has taught me is the transience…of our material accomplishments and, even more, of our ideas about the nature of man…Knowledge in science, as Whitehead said, keeps like fish…For me everything now believed by scientists is open to question, and I am always dismayed to find that many scientists accept current knowledge as forever fixed. They confuse the product with the process." 3

The process goes on! It’s a modern tragedy that so few scientists are adroit critical thinkers, and that so many professionals in general fall sway to the appeals of groupthink and ideology/dogma.

Be flexible, open, adaptable. You’re a finite being (well, your human meat suit is) in an infinite universe of information. Even the amount of information on planet earth is, for practical purposes, infinite relative to a single human.

That makes everyone infinitely ignorant – a sobering thought, no?

Freedom Hackers and Truth Addicts, as opposed to dogmatists, are never satisfied - and even though we know that we can never know everything, we feel a longing to continue to expand and improve on ourselves, ever adapting to new information.

That’s why dogmatism is repugnant to us, and closed minds such a major bore.

Consider:
It is becoming increasingly widely acknowledged that you cannot meaningfully discuss the implications and findings of quantum mechanics without including the effects of consciousness on…quantum systems.

Less than a hundred years ago, firmly entrenched in the mechano-materialistic paradigm, we “knew” such a situation was impossible. Imagine where we might be in another hundred years.

If you can take a step back from the paradigm/model that dominates your mind, and realize that this process of authoring the universe…has been going on since humans first existed, you might find yourself less upset about research that redefines the boundaries of science and causes paradigms to evolve and grow (or die outright).

Because we can then realize that Science never described the Universe to begin with (at least not in totality); it built models of it, approximations—and aspects of some of these models can even be mutually exclusive (such as quantum physics versus aspects of Einstein’s relativity, which is under increasingly heavy fire). 4

Curing Dogmatism
The cure for dogmatism is simpler than it is easy.

However, I’ve noticed over the years how life tends to force experiences on people that challenge their established thinking and state of being, humbling them, and opening them to something new—perhaps something they were once staunchly opposed to and polarised against.

My advice? Don’t tempt the universe (which is all actually you) to force your little egoic self. Embrace transformation and seek to grow and adapt. Otherwise you’re just a dinosaur waiting for the meteorite to hit.
Steps to Curing Ideology and Dogmatism:

😬 Explore spirituality and have experiences beyond your conscious egoic mind's standard beta state (experience altered states of consciousness in a safe environment, e.g. in meditation, breathwork, plant medicine ceremony, etc.).
😬 Disengage from your ego and cultivate the observer perspective where you and your ego are not the same thing (you are the stream of consciousness experiencing your ego). Therefore attachment to its objects of belief is absurd. (Points 1 and 2 fall under the banner of “personal development”.)
😬 Step back from your models and opinions of the world and recognise they are merely artefacts of your mind/ego. They are not you, and nor are they absolute or objective facts.
😬 Go out of your way to open up to information that makes you uncomfortable and which calls into question assumptions you hold. Seriously consider the evidence that you may be wrong, and that in experiencing the humiliation of “defeat” you may actually grow and benefit greatly.
Lean into the discomfort.

Don’t form firm opinions on subjects you have never studied thoroughly from more than just one angle. I see this mistake made by doctors, dentists, professionals, and scientists of all stripes on a daily basis. (It goes without saying that this mistake is stock-in-trade for fundamentalists.)

Since Science (capital "s") is our modern “secular religion” today, it bears mentioning that one must become aware of the sheer amount of fraudulent and flawed junk science that is presented to the public (and other scientists) as "fact."

In reality, science and medicine are rife with corruption and agenda-driven garbage science that actually passes through the “peer review” process and ultimately shapes our collective worldview. It is a systemic problem and a plague.

Therefore, dig deep and get behind the surface level of this “science” and question it rather than taking it prima facie. Who funded it? Where are the conflicts of interest?

Was the experiment flawed in key ways? Did they control all necessary variables?

Was there an agenda behind it? (See covaxxes)

Remember that knowledge is forever evolving, not fixed. Therefore ally yourself with growth and transformation.

Signing Off
Truth addicts can smell formulaic dogmatic thinking coming a mile away. It carries a distinctly stagnant odour.