What REALLY Happens When We Sleep? 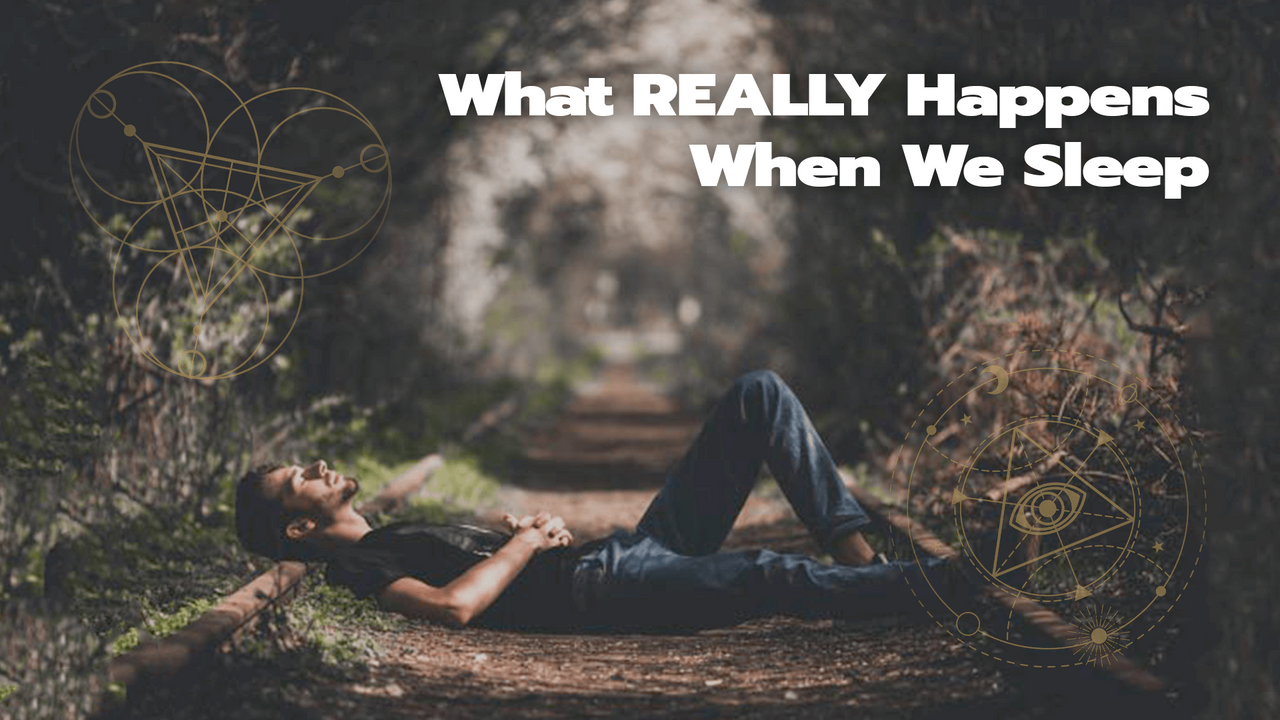 By 1984, late out-of-body explorer Robert Monroe and his team at The Monroe Institute had reached a mix of premises and conclusions that were, as it happens, highly consonant with occult doctrine, including;

Occultists had long since realised that when someone enters sleep, “his higher principles in their astral vehicle withdraw from the physical body,” leaving the dense body and the etheric body remaining on the bed, with the astral body floating in the air above them. “In sleep, then, a man is simply using his astral body instead of his physical.2”

Interestingly, the idea is expressed in Mesopotamian literature, that the soul, or some part of it, moves out from the body of the sleeping person and actually visits the places and persons the dreamer sees in his sleep.3 The Poso Alfures of Celebes (in Indonesia) believe in three souls: the vital principle (inosa); intellectual (angga), and divine element (tananoa)—the latter of which leaves the body during sleep and wanders in dreams.4

There are variations on this trinary theme among other cultures as well. The point is the shared concept of some intelligent principle that separates from the physical aspect during sleep.

Manly P. Hall writes in The Secret Teachings of The Ages of the likelihood that the Eleusinian initiates of ancient Greece (c. 1600 BCE - 392 CE) “realized that the soul left the body during sleep, or at least was made capable of leaving by the special training which undoubtedly they were in a position to give.5”

Muldoon wrote in the 1920s that the astral body moves slightly out of coincidence with the physical body each night, allowing it to absorb the “cosmic force” or prana. The farther away the astral moved, the more easily it could obtain or “condense” (implode) the ambient energy. The distance between the astral and the physical determined the depth of sleep and amount of recuperation achieved.

(“Man does not live by bread alone.”) The more tired you are, the farther the astral moves away from the physical to obtain energy, hence the notion that fasting or being physically ill or weakened can assist astral projection.6

As sleep deepens, the sleeping astral double moves higher and higher, until, perhaps, it moves away to roam the astral, acting out dream scenarios, or, until cycling back into the physical before awakening. Muldoon also pointed out that conscious projection prevents the reenergizing process—unconscious projection is needed for proper recovery in sleep. At this point in time, it is a basic need for most people in order to function healthily.

Dennett explains that while dreaming and hovering outside our bodies, we basically live our stream-of-consciousness fantasies. Theosophical occultism in the early 1900s stated that people operate at night in the astral body, but as soon as it is mastered, work in the mental body begins. When the mental body too becomes completely organised, “it is a far more flexible vehicle than the astral body,” and can do much that the astral cannot.7

From this perspective, the realisation of our astral wanderings takes on a humbling new form. Spiritually, we are but at the larval stage of our development, for the most part.

Dennett (like any serious astral traveller) affirms Monroe’s conclusion that we all go out of phase with physical space-time each night to have OBEs. The event that initially confirmed this for him was awaking one night to find himself out of bed, standing there inexplicably in the dark. Amusingly (though probably less so for him at the time), it dawned that he was out of his body. In a wave of terror fearing he had just died, the panic-stricken Dennett dove immediately back into his body.8

There are many among us who are able to perform (and do perform every day of their lives) this elementary act of magic in full consciousness—who pass from one plane to the other at will; and if that is clearly realized, it will become apparent how grotesquely absurd to them must appear the ordinary unreasoning assertion that such a thing is utterly impossible. It is like telling a man that it is impossible for him to fall asleep, and that if he thinks he has ever done so he is under a hallucination.9

In the obscurely named Breakthrough to Creativity (1967), Shafica Karagulla documents an extensive range of psi phenomena, including a number of mainstream medical practitioners who were also:

“sensitives who attend classes when they are asleep at night. These are not usual dream experiences…None of the irrelevancies appear which are commonly associated with dreams. The lectures are as precise and clear as those given in a college classroom. The individual in question receives instruction and information which is accurate and often useful to him in his work.”

More poignantly, friends and/or acquaintances were also showing up in the same classes “who remember the same lectures on the same subjects…”10 (Emphasis added)

Shared experiences are strong evidence in favour of reality (and consciousness) being nonlocal and holographic.

One mainstream “medical sensitive” was a Dr Philip who was beloved by his patients and frequently consulted by the Mayo Clinic for his remarkable insight. He had kept secret the fact that it was “higher sense perception” that allowed him to function so effectively as a doctor. He could see inside his patients’ bodies, observe any of the organs and immediately detect pathology with no external assistance.

Within a few minutes he could see the complete health condition of a patient just by looking at them and additionally could pre-cognitively see the course the condition would take. He hid these abilities and told Karagulla to share the information only after he had died.

During his nocturnal outings he found himself in a medical college where lucid and logical lectures were given; in the morning he could remember everything that had been said in detail. In these classes he was trained to see into the body to discern its condition and functioning. The ability translated perfectly into his day-to-day medical operations and guided his diagnostic and treatment procedures.11

Karagulla’s friend Vicki was another of these nocturnal students who had spent her whole life visiting the same buildings/learning centres in her sleep. The architecture was simple but unlike anything she had seen in the physical. In the classes, the teacher/lecturer would manifest three-dimensional thought-form models as learning aids, which they could rotate and alter at will.

(All of this sounds very similar to what NDEers and LBL clients tell us about some of what happens in the interlife realms, as I show in great depth in Book 2.)

Vicki could remember every word of the lectures and transcribed some for posterity at Karagulla’s urging. Lectures on the neutron in the iron atom contained some compelling esoteric information which, in fact, dovetails with that in Chapter 6 of The Grand Illusion, where the true nature of atomic and subatomic matter and its structure is discussed.

The class was shown “a schematic model of a neutron in an atom of iron. He represented it as a spiral of a certain number of turns with the two ends of the spiral forming a central line within the coil perpendicular to the plane of the turns of the spiral.”12

See Chapter 6 of Book 1 for more information on this. Vicki was also able to verify the “astral” presence of a friend at one night class, via confirmation over the phone. He remembered the class too, though his recall of the information was lesser.13

[Article continued inside The Truthiversity]

*This material is excerpted from Book 2 of The Grand Illusion

🚨 For the FULL article and access to ALL of my multimedia content, become a member of The Truthiversity ⬅

About Brendan:
Host of Truthiverse podcast. Author of the epic, “The Grand Illusion: A Synthesis of Science and Spirituality — Book 1.” Founder of The Truthiversity 📽

Links:
🧬 Watch my free Evolve Yourself Masterclass to discover how I help people accelerate their healing, evolution, and self-mastery organically without hard work or meditation.