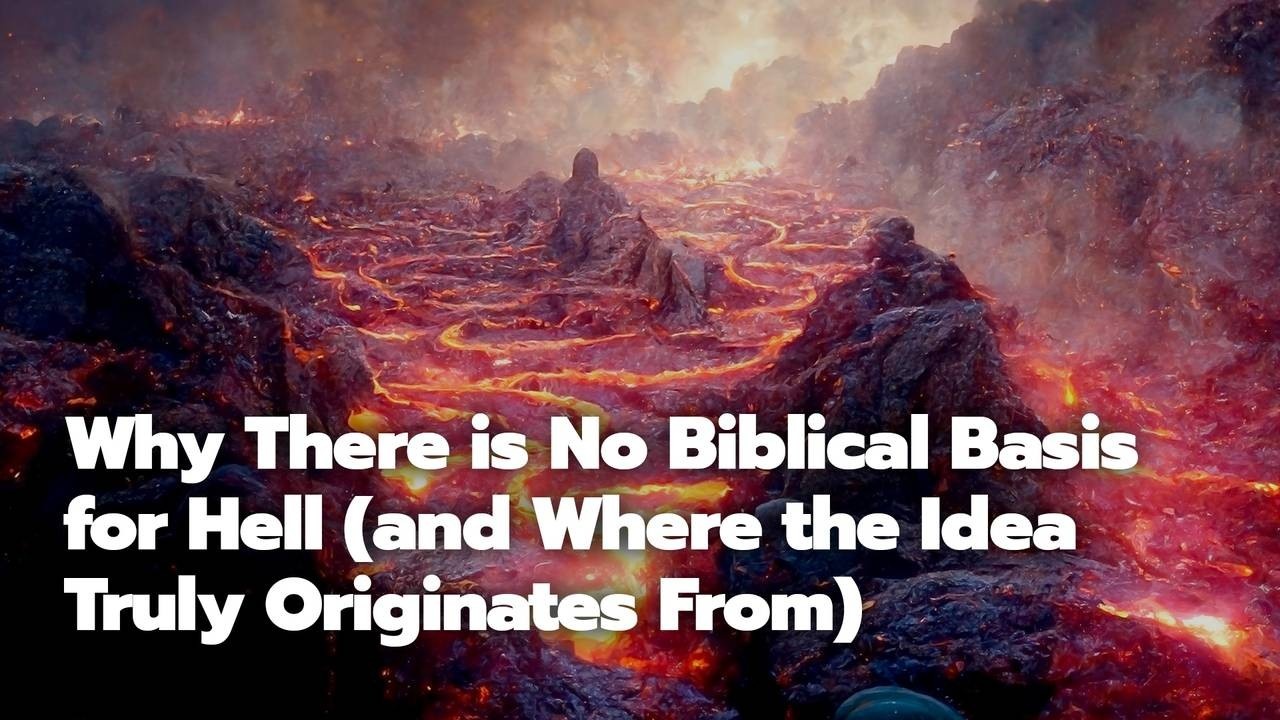 Millennia before Judaism and Christianity as we know them existed, ancient Egypt delivered the “devil” and his fire, brimstone, and darkness. Here we excavate hell’s slippery origins.

“The prototypes of hell and purgatory and the earthly paradise are all to be found in the Egyptian Amenta…The darkness, fire, and chains, as well as the brimstone, which was the stone of Sut, and other paraphernalia of the Christian hell, are also Egyptian.” In contrast to the later Christian distortion, “the chains were employed for the fettering of Sut, the Apap, and the Sebau, the evil adversaries of Osiris…not for the torturing of souls that once were human.”

In the Egyptian hell, however, the irretrievably wicked were not tortured for eternity, they were extinguished, permanently annihilated — this is the second death. The twisted idea of a loving god presiding over the everlasting torture of imperfect human souls seems an entirely Christian one.1

In the Bible’s Revelation we find the (modified Egyptian) concept of destruction in a lake of fire—five distorted mentions no less. The Roman Church carried the dogma of a second death forward, “and then somewhat nullified it by adding punishment of an infinite duration,” for the filthy unbelievers.2

The prototype of the “valley of the shadow of death” was the Aar-en-tet in Amenta: the valley of darkness and death.3

The fires of hell emanate from Amenta, and if you’re familiar with the concept of the “circles of hell,” you can thank Egypt: there were ten circles of the condemned in the inferno. The Osiris in Amenta passes through a hell of fire wherein the condemned suffer annihilation, saying, “I enter in and I come forth from the tank (or lake) of flame on the day when the adversaries are annihilated at Sekhem.”

Massey goes on to point out that the unquenchable lake of flame was based (unsurprisingly) on the solar force in the Egyptian mythology, upon which the post-mortem travails and dramas were based. Thus, the locality of the “lake of flame” was in the east where the sun rises:

“The wicked were consumed by fire…where the righteous entered the solar bark to sail the heavenly waters called the Kabhu, or the cool, and voyage westward toward the heaven of the setting stars,” the latter being the “lake of outer darkness.”5

In the prototypical Egyptian “hell,” “Apap and the Sebau, Sut and the Sami are bound in chains,” not naughty human souls, who are simply obliterated — a prospect the Egyptians found more repugnant than any other possibility, so great was their appreciation for life, according to Massey.

Sut, the pre-anthropomorphic devil, is bound with a chain on his neck, and the Sebau and the Sami simply represent “the physical forces in external nature that made for evil and were for ever opposed to the Good Being and to the peace of the world.” As the hosts of darkness and spawn of Apap (a.k.a. Apophis the serpent), led by the malevolent Sut, they were always in revolt and thus needed to be shackled and chained; subdued and controlled. Christianity, oblivious to its roots, put “sinners” in the place of the Sebau,6 inverting everything to the point of absurdity (and literalising the symbolic anthropomorphisms, a fatal error).

The Christian notion of hell (and the devil) also apparently originates at least partially with the Persian prophet Zoroaster (a.k.a. Zarathustra), who lived around the supposed time of Jesus (this pronoun is inaccurate, but that’s a whole other post). Zoroaster’s ideas on these topics were eventually adopted by early Christianity and elaborated. (Little of Christianity is actually original to Christianity.) Even Amitabha Buddhism teaches a form of hell, though without the moralistic elements found in Christianity (all beings, both in heaven and hell, are seen in their basic nature as the same, and a soul in hell may yet ascend to a heavenly realm).

The Sheol Conundrum
Christians tend to believe “sheol” means “hell,” where "Satan" hangs out with Epstein, Bush Sr., and soon enough, the Clintons, Fauci, and Bill Gates. However, there is no agreement on the root of the word sheol. The New World Encyclopedia tells us:

The concept of Sheol seems to have originated from the ancient Sumerian view that after one dies, no matter how benevolent or malevolent he or she was in life, one is destined to eat dirt to survive in the afterlife. Sheol is sometimes compared to Hades, the gloomy, twilight afterlife of Greek mythology. In fact, Jews used the word “Hades” for “Sheol” when they translated their scriptures into Greek (see Septuagint). The New Testament (written in Greek) also uses “Hades” to mean the abode of the dead.7

Possible linguistic origins for sheol are threefold: First, it may derive from the Hebrew root SHA’AL, meaning “to ask, to interrogate, to question,”; it may be an Assyrian-Babylonian loan-word, “SHU’ALU,” meaning “the gathering place for the dead.” Thirdly, it may have evolved from Assyrian “SHILU,” meaning “a chamber.8”

The Assyrians and Babylonians shared similar ideas of an underworld, which appear to have influenced the Hebrew thought that eventually led into the Christian mutation. The fallacious concept of eternal punishment does not occur in the Hebrew bible,9 where sheol merely designates a bleak subterranean realm. Stephen L. Harris writes, “When Hellenistic Jewish scribes rendered the Bible into Greek, they used the word Hades to translate Sheol, bringing a whole new mythological association to the idea of posthumous existence.10”

Thus, the concept of the hereafter has continued to shift and change according to man’s imaginings. For the ancient Greeks BCE, their afterlife realm was Hades (presided over by the god of the same name, later known as Pluto), a grey and dreary world in the time of Homer (8th century BCE). In Homer’s Odyssey, Odysseus encounters Achilles who tells him he would rather be a landless slave on earth than a king in the underworld.11

“By the time of Plato, however (4th century BCE) the after-life had changed in character so that souls were better rewarded for their pains once they had left the earth; but only in so much as the living kept their memory alive.12”

An article in the St. Louis Star (circa 1952) explained that even the Mayan gods had counterparts in the Greek mythology; the Mayan underworld was very similar to Pluto’s Hades: “It was a place wrapped in eternal darkness and all those cast into it for transgressions in life suffered without end from cold, hunger, thirst, sleepiness, tortures, the sight of cruel spectacles, and were obliged to keep on wandering in the fashion of the Wandering Jew.”13 The Mayan equivalent of Pluto/Hades was Abcatanas, “whose duty it was to foster the sacred tree with its four roots and branches.”

In contrast to Sheol, which apparently translates as “grave” (not hell), the English word “hell” actually comes from Germanic/Teutonic mythology — the goddess Hel/Hela.

Christians erroneously take their hell concept to be signified by the biblical word Gehenna (a Greek term). Whence Gehenna? As mentioned at the beginning of the chapter, there was evidently a Persian/Zoroastrian influence that crept into Jewish thought; hell became associated with the Biblical word Gehinnom or Gei Hinnom, the valley of Hinnom—Hinnom’s son, specifically (Joshua 15:8, 18:16; II Kings 23:10; Jeremiah 7:31; Nehemiah 11:30). Eventually this concept of hell appears to have supplanted the earlier concept of Sheol (grave), mentioned in Isaiah 38:18, Psalms 6:5, and Job 7:7–1014.

In Islam, Gehenna is known as Jahannam.

What do we know about the valley of Hinnom, then? The New World Encyclopedia informs us that Gehenna,

derives from the Hebrew: גי(א)-הינום Gêhinnôm (also Guy ben-Hinnom (גיא בן הינום) meaning the Valley of Hinnom’s son. The valley forms the southwest border of ancient Jerusalem that stretches from the foot of Mt. Zion to the Kidron Valley. It is first mentioned in Joshua 15:8. Originally it referred to a garbage dump in a deep narrow valley right outside the walls of Jerusalem where fires were kept burning to consume the refuse and keep down the stench. It is also the location where bodies of executed criminals, or individuals denied a proper burial, would be dumped…it is traditionally held that this valley was used as a place of religious child-sacrifice to Moloch by the Canaanites outside the city (comp. Jer. 2: 23)15.

In fact, Blavatsky revealed all this with evident disdain and indignation in Isis Unveiled (1877)—a most unflattering expose for Christianity indeed. In the valley of Hinnom/Gehenna was Tophet (Topheth/Topheph), a place where was kept a perpetually burning fire used for sanitary purposes.

“The prophet Jeremiah informs us that the Israelites used to sacrifice their children to Moloch-Hercules on that spot; and later we find Christians quietly replacing this divinity by their god of mercy, whose wrath will not be appeased, unless the Church sacrifices to him her unbaptized children and sinning sons on the altar of ‘eternal damnation’!”16

Because Gehenna was such an unpleasant locale with such a sordid history, the authors of the Gospels obviously had their “Jesus” character use it as a metaphor for spiritual perdition and desolation. Knowing all this, who would want to go to the living hell of Gehenna? The “eternally” burning sanitary fires of the Valley of Hinnom’s son (Gehenna) are clearly used as a metaphor by Yehoshua/Joshua/“Jesus” for spiritual purification and cleansing. You may be reminded of the concept of “burning off karma.”

Blavatsky goes on to point out that when the Jesus character is made to say in Matthew xvi. 18, “…and the gates of Hades shall not prevail against it,” in the original text it reads as “the gates of death.” The word hell, referring to any state of eternal punitive “damnation,” appears in zero passages of the original......

[Article continued inside The Truthiversity]

⚠️ For the FULL article and access to ALL of my multimedia content, become a member of The Truthiversity ⬅ Thanks for your support

*This article is excerpted from Book 2 of The Grand Illusion

About Brendan:
Host of Truthiverse podcast. Author of the epic, “The Grand Illusion: A Synthesis of Science and Spirituality — Book 1.” Founder of The Truthiversity 📽

Links:
🧬 Watch my free Evolve Yourself Masterclass to discover how I help people accelerate their healing, evolution, and self-mastery organically without hard work or meditation.